Before knowing how does a capacitor works, it is essential to know basics of capacitor and what exactly a capacitor is
• Capacitor is component which is used for storing energy in electric charge.
• The capacitance is measured is the unit Farads.
• It is a passive component, so it does not need any electrical power to operate.
• Capacitor can be fixed capacitor, variable capacitor, polarised capacitor. 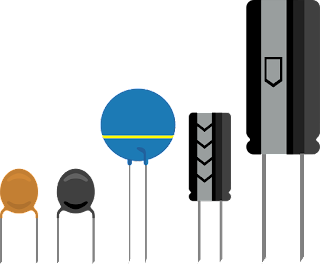 When a load is connected in that circuit with capacitor and switch is turned ON. Lets consider the load is a bulb. Then the electron will move from bottom plate towards the upper plate or top plate through that load. Because of this transfer of electrons from bottom plate to top plate the bulb starts glowing. When all the electrons are transferred towards top plate then only the whole process will stop and bulb will stop glowing and the capacitor is now discharged, that is both the plates are now neutral again

HOW TO CALCULATE THE CAPACITANCE OF OF CAPACITOR ?

C = Capacitance of the capacitor.

€ = Permittivity of the dielectric material.

A= Area of the conducting plates.

We can say that more the surface area of the two plates more will be the Capacitance of the capacitor. Same can be said about the permittivity. But as the distance between two conducting plates is increased then the capacitance will be reduced.