Resistor is the passive circuit linear element which opposes the flow of current or electricity.

As the name indicate linear element it means that as the voltage applied to the resister is changes(increase/decrease),the current flowing through this resister is also changes.

So the relation between the voltage, current and resistance is given by 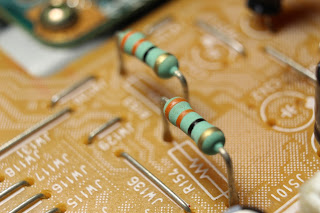 Resistance is a property of a material which changes according to the resistivity of the material.

The relation between the length, area and resistivity is given by

Power rating is a maximumpower which is handled by the resistor.

Mathematically it is written as

While selecting the resistor apart from power rating the ambient temperature is also consider.

Tolerance is a deviation in the resistance from the normal value. 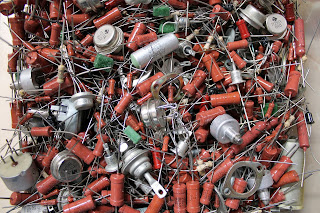 Resistor is not purely resistive in nature it has some inductance and capacitance due to that maximum frequency at which this resistor can be operated is limited.

This parameter is also consider while selecting a resistor for high frequency application.

Stability is the fix, unchanged or constant resistance value over the period of time.

Every resistor has its own noise, while selecting the resistor for low noise application this parameter are consider.

Resistors are divided into two types namely Fixed and Variable. 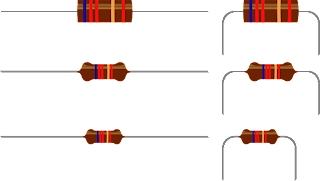 The carbon composite resistor is made up of carbon particles and binder like a clay.

This type of resistor are used in high energy pulses application.

Due to the poor stability, poor coefficient , more noise, less accurate Carbon Composite Resistor are replaced by the Film type of resistor.

Carbon film resistor contain ceramic substrate and thin layer of carbon film has been deposited in the form of a helix.

According to the pitch of the helix the resistance value of this resistor is changed.

It is used in high temperature and high surge applications.

In wire wound resistor the metallic resistive wire is wound around the ceramic material.

Thickness and gaugeof metallic wire defines the resistance value of this resistor.

Copper alloy and silver alloy are used for resistive wire.

It has high accuracy, low temperature coefficient used in high power and high precision application. But it is not suitable for high frequency applications. 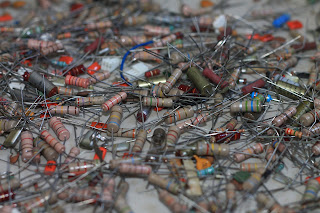 On top of the resistive film a thin layer of insulating layer has been deposited, metallic contact is present on both the side of this resistor so that this resistor is soldered on the PCB.

It has very high accuracy and very low tolerance value.

In variable resistor by changing the knob the value of the resistor will be changed.